NewRealityProof: Why there’s nothing wrong with the natural growth of an economy 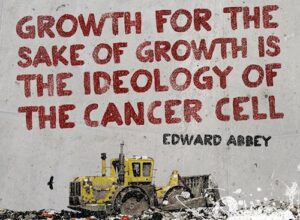 For decades, reporting on the state of the economy has been dominated by growth figures. Apparently the government and economists are convinced that an economy must grow. And if that is not the case, that this is disturbing and bad. At the same time, economic growth in the corner of the sustainability movement is portrayed as negative because there would be limits to this growth. If we look at the issue from a free market perspective, it’s not all that bad.

What is economic growth?

When we talk about economic growth, these are questions that might come to mind: What exactly is so good or bad about growth? How much growth is good? And who decides that? By asking these questions it becomes clear that the concept of ‘economic growth’ is in fact political and therefore subjective in nature. For whom is the question really important? For individual producers and consumers? Or for the managers of economies?

In his book ‘Man, Economy and State’, the American philosopher and economist Murray N. Rothbard (1926 – 1995) describes the process of growth in a free market environment as follows: “In a free market, for example, every person chooses how much future growth he wants as compared to present consumption. “Growth,” i.e., a rise in future living standards, can be achieved, (…), only in a few definable ways. Either more and better resources can be found, or more and better people can be born, or technology improved, or the capital goods structure must be lengthened and capital multiplied. In practice, since resources need capital to find and develop them, since technological improvement can be applied to production only via capital investment, since entrepreneurial skills act only through investments, and since an increased labor supply is relatively independent of short-run economic considerations and can backfire in Malthusian fashion by lowering per capita output, the only viable way to growth is through increased saving and investment. On the free market, each individual decides how much he wants to save—to increase his future living standards —as against how much he wants to consume in the present. The net resultant of all these voluntary individual decisions is the nation’s or world’s rate of capital investment. The total is a reflection of the voluntary, free decisions of every consumer, of every person.(…) in a free market, everyone gets as much “growth” as he chooses to obtain; and that, furthermore, the people as a whole benefit greatly from the voluntary savings of others who do the saving and investing.”

Growth is a natural process

It is clear from this explanation that ultimately consumers and producers themselves determine whether there is growth and to what extent. Economic growth is not a dictate imposed from above. Growth is a result of the fact that people are creative, innovative and enterprising. People have the authentic, natural need to improve themselves, earn more, promote themselves or discover a gap in the market. Economic growth or contraction is basically a natural process that is driven by countless individual choices of producers and consumers that can only be known later.

To the extent that politics and government try to promote economic growth artificially by printing money, lowering interest rates or through subsidies, it disrupts the process of saving and investing, which is so important. These measures are precisely at the expense of possible growth because individual freedom of choice is taken away, natural economic processes are disrupted in favour of certain companies or sectors in the market. They result in one group being favoured at the expense of another. A good example of this is the alternative energy sector, such as wind and solar energy. These are heavy subsidized industries. In a free and competitive environment everyone benefits from real economic growth.

The only interest that politicians and government have in the growth of an economy lies in the effect it has on tax revenues. Tax revenues are the petrol on which the engine of politics, government and the (re)financing of their national debts runs. Government debts are least painfully repaid by economic growth. After all, that means more tax revenue and less expenditure on benefits. This is the path of least resistance. Harsh austerity measures on the side of government spending or structural reforms of the economy (less central planning and more free market) are considered political suicide. It is only for these reasons that economic growth has taken on such a life of its own among politicians and thus in society.

Kim Tjoa is entrepreneur in the sharing economy and co-founder of NewRealityProof.